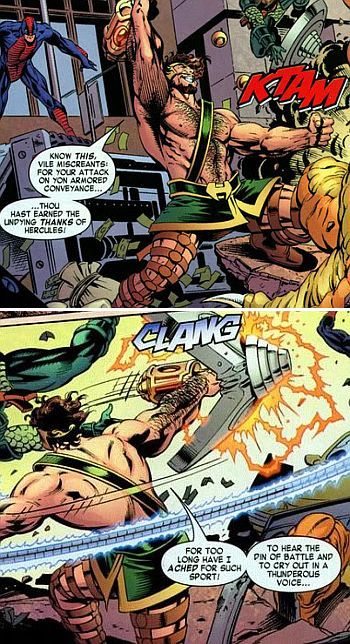 "Battle doesn't need a purpose; the battle is its own purpose. You don't ask why a plague spreads or a field burns. Don't ask why I fight."

War Is Hell? Not for this guy.

Fighting is everything to the Blood Knight. He lives for it. He might deliberately disadvantage himself in order to make fights last longer, and loves to reveal that he is not left-handed. It's not so much winning or losing, morality, the motives of his allies, or even the glory, that drives this guy so much as the opportunity for a good fight.

The Blood Knight can be of any moral alignment whatsoever. If heroic, he will frequently be The Big Guy in an ensemble, the character most likely to solve his problems by force of arms, and he might make the less violent members of the crew a little nervous, especially if he goes off on a hair trigger. If villainous, he has a good chance of being a Worthy Opponent, since he doesn't want to defeat the heroes, necessarily, just fight them. He might affect a Heel Face Turn if he can find someone tough enough to beat him, or simply drop everything to pursue and obsess over his foe. However, sometimes, this trait may not be benevolent trope as some Big Bads and their right hand men or villains in general are either your devoted villain or worse who will do do all kinds of horrible things to trigger his opponent's Berserk Button enough to fight seriously and give them a challenge.

Personality-wise, he can be on the "burn, fight, kill!" level, or, if he's a little more sophisticated, he might have aspects of the Warrior Poet or the Warrior Therapist. He might be a normal, jocular guy when he's not brawling, or he might take the fight so seriously that he blocks out everything else. In some cases, the Blood Knight fights because he's looking for a way to die with meaning. Many Blood Knights Would Not Shoot a Civilian, though often, it's because a civilian will not give a good fight. This is not always the case though; if the person is less moral they will specifically target the innocent in order to make their real target want to fight them.

A common version found in Eastern fiction is the Wandering Martial Artist, who travels around the world/country looking for strong opponents to test his skills against. Luckily, this might be coupled with love of only specific fights such as duels, meaning he is not otherwise a particularly violent man.

If there's a whole society of guys like him, you've got a Proud Warrior Race. If the character likes the 'killing' part more than the 'fighting' part, they're a Psycho for Hire. The Egomaniac Hunter also thrives on aimless violent thrill and loves a worthy quarry instead of opponent. If a character is in it for the challenge rather than just the fight, then we've got a Spirited Competitor. The Blood Knight's love of combat may be platonic, or it may have sexual undertones.

Sub-Trope of In Harm's Way. Sister Trope to Combat Sadomasochist, The Real Man and Boisterous Bruiser. Compare Cavalier Competitor. May be from a Martyrdom Culture and will often believe that War Is Glorious. As a rule they are just about always Not Afraid to Die.

A Monster Knight has a high chance of being one.

Oh, and just in case it wasn't clear, the character doesn't have to be a literal knight for this trope to apply. It is about the attitude, not the rank.

If you're looking for persons who use blood to kick ass, try Bloody Murder.

Examples of Blood Knight include:

"It's nice to be face to face with death every once in a while. Right now, the only thing in my mind is the fact that I'll fight to the death with you. Social status, career, origin, race, gender, name... none of that matters. Not being bound by anyone and fighting just for the sake of it. How astounding. I've finally reached this stage."

I caught a glimpse of heaven once... Then I was cast down. Back to a world of killers. Rapists. Psychos. Perverts. A brand new evil every minute, spewed out as fast as men can think them up. A world where pitching a criminal dwarf off a skyscraper to tell his fellow scum you're back is a sane and rational act. The angels thought it would be hell for me. (said "dwarf" hits the ground with a splat) But they were wrong. Welcome Back, Frank. Says New York City.

Batman: Still, doing it this way does have its compensations. My fists fit so nicely into their guts. And impact meat and bone with perfectly satisfying thumps.

"Dear Frederick, thank you for your nice letter. But I'm actually a US Marine who was born to kill, where you have clearly mistaken me for some sort of wine sipping communist dick suck. And although peace probably appeals to tree-loving-bisexuals like you and your parents, I happen to be a death-dealing, blood-crazed warrior who wakes up everyday just hoping for the chance to dismember my enemies and defile their civilizations. Peace sucks a hairy asshole, Freddie. War is the mother-fucking answer."

"You know, everyone I know is fighting to get back what they had. I'm fighting because I don't know how to do anything else."

Mycroft: You're not haunted by the war, Dr Watson...you miss it! Welcome back!

Skrimir: Bah! Is that it? I still crave blood! Find me more humans to kill!

The Echani believe in a non-existent warrior code of honour, and the Mandalorians prize credits above bloodshed. But I am Iridorian. Honor comes from slaying your opponent, and the true reward of any job is the taste of your foe's drying blood on your tongue.

Dante: So bring it on! I love this. This is what I live for. And I'm absolutely CRAZY about it!

Black Whirlwind: I won't stop until I'm ankle deep in blood, standing on my head!

Black Whirlwind (while waiting for an army to arrive): Why wait? We should just charge them now

"That was interesting. But dropping a battleship on me is cheating. Take it back..."

Garland [to the Warrior of Light]: It is time for you to accept the cycle and embrace combat's grim pleasure!

"Beat or be beaten! Such is the way of the Legion!"

"Another day, another glorious battle!"

(on death) "Now this gets interesting..."

"Harness your hate, make it useful!"

Grunt: Shepard! You're missing it! It's goddamn glorious! I'll climb out on their bodies!

Shepard: What is fun to fight through?

Garrus: Gardens, electronics shops. Antique stores, but only if they're classy.

Marlowe: I wonder what you're really afraid of. Not bullets or blood or broken bones. No, you get off on all this, don't you? Cheating death...

"I prefer to beat my opponents the old-fashioned way: brutally!"

A challenge to fight was often less a reflection of animosity than an invitation to engage in a convivial form of recreation.

Retrieved from "https://allthetropes.fandom.com/wiki/Blood_Knight?oldid=335281"
Community content is available under CC-BY-SA unless otherwise noted.