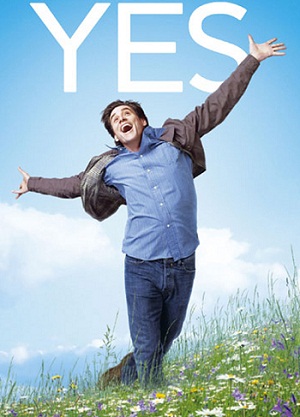 Whereas the Big No expresses displeasure or despair, the Big Yes can express extreme pleasure (such as charging up a boarding ramp and gaining superpowers), but it can also be used by Large Hams as a way of expressing joy, agreement, or if the ham is extra large, the reply to a harmless yes or no question.

Also can be used as a response to obvious or rhetorical questions in which cases it means, "Geez, you really think so, Sherlock?" or "Just do it already!"

It can be uttered quickly or drawn out, as long as it leaves an impression of some sort. Can be substituted with "yeah" or "yay." Foreign language examples are also welcome.

A Sub-Trope of Big Word Shout. Might overlap with Metal Scream.

The Big Yes is often a major component of The Immodest Orgasm and the Power High trope.

Contrast Big No and Big "Never!".

Examples of Big Yes include:

"And you think my son might be this person the soldiers are calling the Blue Spirit?"

Till at last, I confess,

That's how I subscribed to Liberty magazine!

Roddy Piper: "Will you accept his challenge, Yes or No?!"

Retrieved from "https://allthetropes.fandom.com/wiki/Big_Yes?oldid=282576"
Community content is available under CC-BY-SA unless otherwise noted.