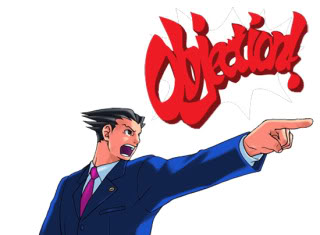 When anyone shouts a single word (repeat, one word) hard and loud (although that one word can be shouted more than once), for various reasons, as long as the reason is other than actually needing to shout. If someone is shouting because of a noisy room, someone is far away, or that someone is barking out orders, it doesn't count.

If the word is someone's name, this often takes the form of a Skyward Scream.

A Sub-Trope of Chewing the Scenery.

Compare GASP, Say My Name, Calling Your Attacks, Metal Scream, Death Wail, Big OMG, Big "Shut Up!", Punctuated for Emphasis (those three would be sub tropes, but use more than one word).

Not to be confused with Big Words.

Examples of Big Word Shout include:

Critic: * Leans back in his chair and breathes a sigh of relief, before doing a Double Take as he looks outside to see a leveled city and emergency response teams running around.* "Er..... Sorry."

"And one of them has the greatest superpower of all, GUUUUUUNS!"

Linkara: WHY?! Why make a comic about the Kool-Aid Man?!

Retrieved from "https://allthetropes.fandom.com/wiki/Big_Word_Shout?oldid=312290"
Community content is available under CC-BY-SA unless otherwise noted.