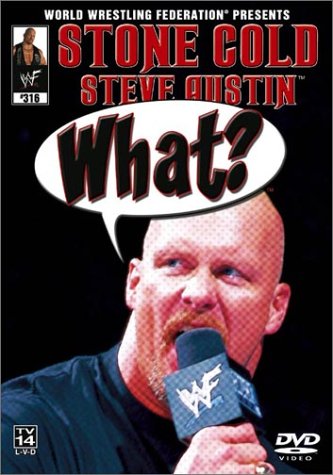 If it gets cut off, it's more likely to be a Flat What for some reason. (WHAAAAAAAAAAT?!)

A Sub-Trope of Big Word Shout.

Compare Flat What, Defensive What, Big No.

Examples of Big "What?" include:

"Chamo:" Didn't I tell you? An Ermine Fairy has the happy blushy super ability to measure people's affections.

Twilight Sparkle: Hey! You're a human aren't you?

Dodoria: I am a woman!

Dodoria: I said I am a woman!

Elijah Mohammad: (to the man previously known as Cassius Clay, and later, Cassius X) From this day forward, you shall be known as Muhammad Ali.

(Cut to the next scene at the front yard of Cassius Sr.'s home, where a visibly shocked father turns around to face his son.)

Chief: What? What?? WHAAAAT??! The glove is losing his touch!!

Chief: WHAAAAT??! (lifts Max up by his ears) We Meanies only take "NO" for an answer!

Denham: Wait -- what about Kong?

Jack: What about him?

Denham: We came here to make a moving picture, and we found something worth more than all the movies in the world!

Iago: Okay, okay, you marry the princess, all right? And... and uh, then you become the sultan!

Jafar: Marry the shrew? I become sultan? The idea has merit...

Ax: Prince Jake, you do realize I have no idea as to where to place the explosive or when to set it off?

Borusa: Commander, you are authorized to use the Mind Probe.

Castellan: WHAT? No, not the mind probe.

Woman: Yes. Celia Rubenstein loved all mankind. She was--

Undertaker: I'll tell you what, why don't you say "what" if you like to sleep with your own sister.

Hulk Hogan: --cha gonna do, brother, when Hulkamania runs wild on you?

The Miz: [WHAT?] YOU ALL SOUND LIKE A BUNCH OF DUCKS! WHATWHATWHATWHAT! SHUT UP WHILE I'M TALKING!

R-Truth: Air Boom is as bad as a sneaky fart.

The Miz stops the crowd from saying the usual What.

The Miz: I got this. [Looks at R-Truth, completely dumbfounded] What?

Vince McMahon: And next week, in spite of your insidious and stupid "What?"s-- [WHAT?] Thank you. And, if you're an imbecile and you're from Hartford, you'll say-- [WHAT?] That's my point.

Ms. Pennywise: Hope is my daughter!

The Poor: (all gasp in shock)

Litchi: I love Ragna the Bloodedge!

Roy: Wait, what? What about the Blood Oath of Vengeance?

Case Worker: It's not a problem for us. Go on up.

Roy: In lieu of Paradise, can I just get a picture of the exact expression on his face?

Prince of Town: And the Duckie-man is the winner! Loser gets the egg!

So and So: (shouting) VALENTINES!

Donut: You guys seemed like you knew each other.I thought you were just catching up.

Simmons: He was firing grenades at me!

Donut: Yeah? So? I thought that was an inside joke between the two of you.

Simmons: What? What kinda joke would that be?

Donut: Well how do I know? I've been gone a long time, Simmons.

Donut: In fact, it was clear that I didn't know the guy. So shame on you for not -->introducing us. And quite frankly, I found the whole thing a bit rude.

Ferr: That was good!

(Maxwell scores a Tetris, the garbage lines pushing pipes!'s stack to the very top of his screen)

(pipes! loses. The other three burst out laughing.)

BohepansTheThird: ...WHAAAAAAAAAAAAAAAAAAT? Did you just see Mario go way high in the air? How the fuck did that happen?

Homer: You did WHAAAT?

[beat, cut to inside house]

Bart: I borrowed your nail clippers. What's the big deal?

Homer: Nothing. I'm just a bit edgy since your mother became a cop.

Meg: If you take him to jail, you have to take me too!

Joe: I know, that's the plan. You're under arrest for harboring an escaped convict.

Meg: Oh, well, that's only fair, because, after all, I did hide him from the WHAAAA?

Stewie: A new baby? How wonderful. Call me when Kojak starts. (beat) WHAT?!?!

Gandhi: Cut! No, no, no, man! You're makin' me fall asleep! To death, bro! Okay, the line is: [high pitched, manner similar to Chris Tucker] "Say WHAAAT?!"

Carver: [flatly, once again] Say what.

Carver: Gandhi! This character is not me!

Twilight: Uh... but I... WHAT?! The hydra wasn't the doozy? How could it not be the doozy? What could be doozier than that?!

Jake (pretending to be Finn): (after learning she's evil and psycho) Y'know, On Second Thought, we're not really each other's types...

Jake (pretending to be Finn): I changed my mind. I don't like you.

Retrieved from "https://allthetropes.fandom.com/wiki/Big_%22What%3F%22?oldid=282577"
Community content is available under CC-BY-SA unless otherwise noted.