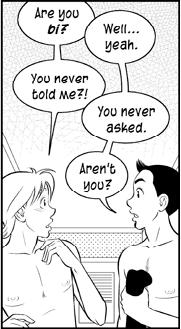 "I know quite a bit about the opposite sex. Many of my lovers were men."
—Helena Wells, Warehouse 13

Some characters just happen to be bisexual. They aren't sociopaths or polymorphously perverse incarnations of uninhibited slutdom; they're just folks who can be attracted to both men and women.

Bi the Way is uncommon in mainstream media (though almost a logical necessity in others) in part because a lot of both straight and gay people appear to believe that bisexuals are somehow 'cheating' by playing both sides of the field. All may be fair in love and war but there's something about the idea of losing someone to the opposing team that makes the "betrayal" worse because that's the one level where people who are exclusively straight or gay are unable to compete. Add in the fact that people tend to be paranoid and have low self esteem and there's a lot of hostility out there. If Bi the Way is played straight anywhere it tends to be in Biography.

"Outing" a bisexual can be convoluted. Some pass for straight or gay or allow others to make their own assumptions. Bisexuals are not portrayed so much for their mannerisms as their supposed habits. As a result, a het-seeming bisexual reads as Straight Gay, whereas a bisexual that acts Camp Gay is likely to be seen as subverting the stereotypes associated with a camp persona. Actual bisexual stereotypes are generally limited to glam rockers, hippies, swingers and other flamboyant presentations of alternative sexuality. So in the end it's likely that Bob or Alice Bisexual will be outed in passing.

Compare If It's You It's Okay, where someone who has shown interest in a certain sex in the past has one exception. Contrast Depraved Bisexual, where liking both sexes makes you crazy (or conversely, being crazy makes you indiscriminate), and Anything That Moves, where bisexuality implies a lack of discrimination in partners. (Believe it or not, the two are not necessarily linked; just as straight and gay people don't find everyone of their preferred sex attractive, bisexuals are attracted to some men and some women.) Also contrast Suddenly Sexuality, where a character skips to the complete opposite end of the Kinsey Scale with no warning. If the person is also a Badass (mostly physically speaking), then he or she double as Badass Bisexual.

The most likely bisexual archetype to lead to But Not Too Bi. No Real Life Examples, Please: everyone knows this happens.

Examples of Bi the Way include:

Revy: In prison... I've won over some sex-starved dykes by playing the man's role. And... after that, their fingers just weren't enough for them ever again.

Drew: "Oh, you're bisexual! That explains why you were so good with my nipples!"

Carrie: "How does that work? You go to bed one night, wake up the next morning and poof, you're a lesbian?"

Jane: "What I could really use right now? Big distractions. Like, tequila shots and a dirty weekend with Brad Pitt. And Angelina Jolie."

Jack *referring to Rose being affectionate with Mickey* Aw, sweet. Look at these two... How come I never get any of that?

Ninth Doctor: *smiling* But worth it!

John: Who the hell knows about Sherlock Holmes, but if anybody out there still cares, I'm not actually gay.

Irene: Well I am. Look at us both.

"Huh, I didn't know I swung this way"

Aggie: "You could have given me some warning. Told me you were bi."

Retrieved from "https://allthetropes.fandom.com/wiki/Bi_the_Way?oldid=388869"
Community content is available under CC-BY-SA unless otherwise noted.