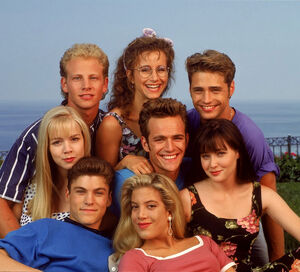 Beverly Hills, 90210 was one of the most popular teen dramas during the early 1990s. It ran for ten years (from 1990 to 2000), and had all but changed its entire principal cast by the end of the show's run. It is generally agreed that the show declined in quality after the cast graduated high school.

The show focused primarily on the Walsh family, particularly fraternal twins Brandon and Brenda, who had just moved into Beverly Hills and were (at least initially) suffering a certain degree of culture shock. It is worth noting that the Walshes were the only original characters absent in the finale. The action also included the twins' friends Dylan, Steve, Andrea, Kelly, Donna, and David. The show managed to touch on almost all social issues, including drug use, drunk driving, rape, unprotected sex, abortion, and even apartheid. (There is a persistent rumor that Spelling wanted to license a U.S. version of the Degrassi franchise but was turned down by that show's producers).

The show's casting includes some of the most dramatic examples of Dawson Casting in recent memory, to the point where many sites often refer to the trope as "90210 Syndrome". Luke Perry was 24, Ian Ziering was 26 and Gabrielle Carteris was 29 playing 16.

Had a Spin-Off in Melrose Place (which itself had a less successful spin off in Models, Inc.) and a more recent Sequel Series simply titled 90210. The new series is mostly focused on a new cast of characters though Donna and Brenda have made cameo appearances and Kelly is an important recurring character. Also Kelly's sister, main character (Erin) Silver is technically from the original.

Retrieved from "https://allthetropes.fandom.com/wiki/Beverly_Hills,_90210?oldid=354176"
Community content is available under CC-BY-SA unless otherwise noted.