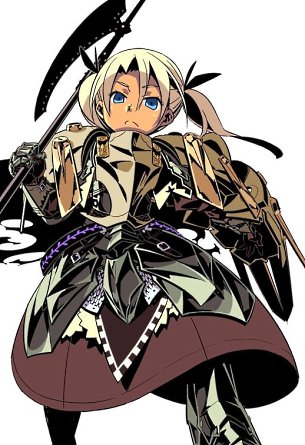 A dress that is lightly to heavily armored, and thus would fit in either a social gala or an epic melee. The form of the dress can range from a fancy dress accessorized with armor and/or weapons (even if it also has typical dress trimmings), to basically a suit of armor with a skirt.

The point of this dress seems to be a combination of Rule of Glamorous and Rule of Cool, as such an outfit will almost always be Impossibly Cool Clothes. Armored skirts were historically used (and mostly for men at that) as they allowed waist protection to be maximized without obstructing the legs but they never got as large as many of the examples in this article as the sheer weight would restrict mobility anyway.

Naturally the ladies wearing these kinds of dresses are almost always Action Girls: Ladies Of War and Badass Princesses or other tropes related to Silk Hiding Steel (literally inverted in this case). If the dress is on the fancy end, it overlaps with Kicking Ass in All Her Finery. If any other girl ends up wearing this, expect her to fall over almost immediately, if she can even move.

Remember that this is an armored dress, not simply a fancy dress worn in battle. These go into Kicking Ass in All Her Finery instead.

Examples of Battle Ballgown include:

Retrieved from "https://allthetropes.fandom.com/wiki/Battle_Ballgown?oldid=367327"
Community content is available under CC-BY-SA unless otherwise noted.