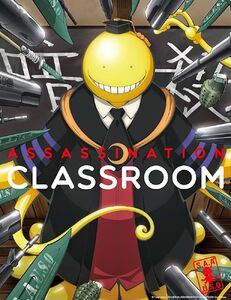 A 2015 television series based on the Shonen Jump manga Assassination Classroom.

Koro-sensei is a dangerous alien that has promised to destroy the world in one year. The governments of the world frustratingly tried to kill him but their methods failed again and again. But the creature possess a weird desire: to be a high school teacher to a class of students in Japan. The japanese government agreed under the conditions he shall never harm his students to keep his position as teacher.

They also put a 10 billion of yen bounty on him for whoever kills him, student or not. This will be a dangerous school year...for the teacher.

The first season of the show covers the manga's first 73 chapters in 22 episodes. The second season covered the remaining 107 chapters in 25 episodes.

Both seasons were directed by Seiji Kishi.

Tropes used in Assassination Classroom (2015 anime) include:
Retrieved from "https://allthetropes.fandom.com/wiki/Assassination_Classroom_(2015_anime)?oldid=363775"
Community content is available under CC-BY-SA unless otherwise noted.