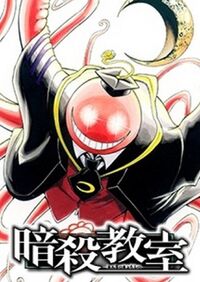 A 2013 OVA based on the Shonen Jump manga Assassination Classroom, directed by Keiji Gotou.

Koro-sensei is a dangerous alien that has promised to destroy the world in one year. The governments of the world frustratingly tried to kill him but their methods failed again and again. Finally, they put the alien to teach high school students. No, this isn't a plan to make him feel pity for mankind. His students are tasked with the mission of killing him.

This OVA, however, is just a Breather Episode, involving the class going in a school trip to Kyoto with their teachers. It has little to do with the overall main plot, whichnis understandable because that would be pretty hard to fit in such a short running time. Two years later, that would be done in a whole anime series.

Tropes used in Assassination Classroom (2013 anime) include:
Retrieved from "https://allthetropes.fandom.com/wiki/Assassination_Classroom_(2013_anime)?oldid=365219"
Community content is available under CC-BY-SA unless otherwise noted.