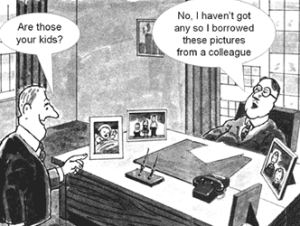 "I see this guy Marty tryin' to carry a big ol' sofa up the stairs all by himself. So I, I say to him, I say 'Hey, you want me to help you with that?' And Marty, he just rolls his eyes and goes Noooo, I want you to cut off my arms and legs with a chainsaw!'

So I did."
—Weird Al Yankovic,
Albuquerque

You know how obnoxious Captain Obvious can be. You just want to yell at them and say, "Any blind idiot can tell what's going on!" But then there are those Captains Obvious who can not only tell what is going on, but ask a stupid question just to verify.

This is not only when that question is asked, but to the frustrated individual this is their chance to strike back with a non-sequitur, either in a Deadpan Snarker retort or full on Mind Screw confusion. A specific variation of Sarcasm Mode.

While examples on this page are of In-Universe instances of this type of exchange, this is certainly a staple of MS Ting by pointing out where people are being oblivious to their dialogue (or being repetitive in them). For example: "This is a map to Hammunaptra." "The Hammunaptra?" "No, the one in Jersey."

Of course, if you decide to avert the inevitable sarcastic retort by not seeking explicit confirmation that your friend with the house full of boxes is actually moving, nine times out of ten it will turn out (after a generous helping of Poor Communication Kills) that he is just having the house fumigated.

An attempt to maneuver someone into asking a stupid question for the purpose of delivering a snappy answer is What's a Henway? When the stupid answer is, in fact, correct, it's Don't Be Ridiculous.

Examples of Ask a Stupid Question include:

Jamie Madrox: How long was I out?

Guido Carousella: Seventeen years. The US was bought by the Swiss. The new national bird's the cuckoo, but the chocolate's better.

Jon: By the way there, doc, what's your name?

Jon: Gee, what a pretty name. Is that short for Elizabeth?

Liz: No. It's short for lizard.

Jon: Are you going to sleep all day, Garfield?

Garfield: Let me check my social calendar. Let's see... There's high tea with the Queen of England tomorrow, but nothing today. (falls asleep)

Gerald: No, I'm up in a balloon milking a chicken.

Jellybean: Did you have that on you the entire time?

Jack: No, I teleported back to the Looking Glass while we were running from the Jabberwock and stole it then.

Namekian: What do you want from us? Why are you slaughtering our people?

Freeza: Well, you see, I was just in the area and I thought this would be a delightful place for a summer home... -- What the f*ck do you think I'm here for?

Mrs. Tweedy: It's a pie machine, you idiot. Chickens go in, pies come out.

Vera: Mom, are you taking a bath?

Matty: No, I'm getting a massage from a big black guy.

Paul Vitti: I couldn't get it up last night.

Paul Vitti: No, I mean for the big game against Michigan State. Of course sexually!

Jelly: Can you handle [a gun]?

Ben: What, you mean shoot it?

Reporter: What, Hildy, you still here?

Hildy: No, I'm in Niagara Falls.

Perry: OK, first thing's first: we gotta move her somewhere. You got gloves?

Perry: Gloves, do you have gloves? We have to move her. If it's a frame-up, some asshole's probably calling the cops on you right now. Do this: wrap up the body, in a blanket, a sheet, anything.

Hanks: The president of what?

Farrell: Did you see that!?

The Dude: Obviously, you're not a golfer.

Jimmy Dugan: Does he know how good you are?

Zaphod: No, Beeblebrox over here. Who are you?

Jake: Marco would like me to pass along a sarcastic remark.

"Looking for something?" Dali came up from the hallway.

Dali blinked at me. "Would you mind making coffee while you're dancing? I smell it on the bottom shelf, either first or second jar on the left."

"Catching up on our reading, are we?"

"No, I'm trying to burn a hole through paper with my retina."

Peter: You know how jazz is all about improvising on a melody?

Lesley: No, I thought it was when you sang about cheese and tying up people's gaiters.

Brent: Whoa, what are you doing?

Cuddy: Chase and Cameron are together?

House: If by "together" you mean "having sex in the janitors closet" then yeah!

House: No, the one at the local high school. Go Tigercats!

Foreman: What are you doing?

House: What does it look like I'm doing? I'm fighting the power.

House: There's a bullet in his head.

Cameron: He was shot?!

Dorothy: Have you ever given a eulogy?

Rose: You mean at a funeral?

Dorothy: No, Rose, at a pie-eating contest!

Dorothy: (seeing Rose coming out of her room with a bucket in each hand) Oh Rose. Is your roof leaking too?

Rose: No Dorothy. I just finished milking the cow I keep in my closet. Gee with only three hours sleep I can be as bitchy as you!

Dorothy: It's dirty dancing, just like in that movie.

Frasier: Roz, that was quite a flattering description. Just out of curiosity, were you just helping that lady with her fantasy, or do you really see me that way?

Roz: You really don't know, do you? Frasier, I am so attracted to you. I always have been. Your looks, your voice, you don't know how many times I've wanted to strip naked and hurl myself at that glass partition like a bug on a windshield.

Frasier: Are you through?

Roz: (bopping him on the head) Well, ask a stupid question!

Mandy: Who was the last president to commute a [death] sentence?

C.J.: There's an article I want you to read in the New Yorker.

Josh: What's it about?

C.J.: No, the dessert topping, Josh. Yes, the disease!

Carly: You won the boat?

Sam: No, our potato farm!

Carly: What's the temperature in here?

Carly: Turn the heat up to ninety!

McGee: You ran all the faces?

Abby: No. Halfway through, I was just like "screw this!" and I quit.

Dawn: What are you doing?

Xander: Hey, did you guys hear that Cibo Matto is going to be at the Bronze tonight?

Xander: No, Will, they're going to be clog dancing.

Dick: I can't get his face out of my mind!

Dick: (serene voice) No, Nina, little Davey Tenant, the boy down the block. You see, ever since Davey was three years old, he's wanted more than anything to see a real professional baseball game. He wished the biggest wish his little heart could muster. But his dad was laid off and couldn't afford the tickets. Well, one day last week, little Davey was outside playing ball like he always does, and who should walk up the block, tall as a building, but home run king Mark McGwire. To see little Davey's face light up as Mc Gwire handed him four seats on the first base line, well, it's something that I will never forget. (pause) YES, STRUDWICK'S! DON'T ASK STUPID QUESTIONS!

Wayne: Joey, I'll get you your job back if you help me out.

Joey: Why should I help you out?

Chandler: ... the reason he just said?

Chandler: I got her machine.

Chandler: No, interestingly enough, her leaf blower picked up.

Chandler: The Jamestown colony of Virginia. You see, King George is giving us the land so...

Lestrade: So she was writing 'Rachel'?

Receptionist: Are you at home, or are in you in Palm Springs?

Rory: What happens if you die in reality?

Dream Lord: You die, stupid, that's why it's called reality.

Rory: Okay, I'm trapped inside a giant robot replica of my wife. I'm really trying not to see this as a metaphor.

Amy: How would you know that?

Rory: Well, there was a ray, and we were miniaturized.

Martha: (thinking about Harry Potter) You mean the films?

Tenth Doctor: No, the Novelization.

Rimmer: Lister, is that a cigarette you're smoking?

Lister: No, it's a chicken.

Now instead of four in the eights place

You've got three, 'cause you added one,

That is to say, eight, to the two,

But you can't take seven from three,

So you look at the sixty-fours.

"Sixty-four? How did sixty-four get into it?" I hear you cry.

Well, you ask a silly question, and you get a silly answer.

Gonzo: (hearing Rizzo climbing back in) Is that you, Rizzo?

Rizzo: No, it's Santa. I forgot my reindeer.

Troubleshooter: How did all these people get drugged?

Troubleshooter: The drug is in the water?

Drugged Citizen: Sklaxxl. No, the drug is on the inside of the cups! Of course it's in the water. Hrraww.

Church-in-Sarge's-body: Uhh... Who ya talking to red? Me?

Grif: No, I'm talking to Lopez, because, you know, that's real rewarding.

Grif: Fuck off, Blue, a ship just crashed on one of our guys.

Church: What, this ship?

Simmons: No, another ship, then that ship left and this ship crashed in the exact same spot.

Donut: What state were you named after?

Skipper: What do you make of it, Kowalski?

Kowalski: I'm not sure, Skipper. It could be anything.

Skipper: Oh really? Could it be Alaska?

Kowalski: No, it's probably not--

Skipper: Are you saying Alaska might be stuck upside down to the clock tower of my zoo?

Skipper: Because I think people would notice if the entire state of Alaska just... packed up and... moved to the zoo!

Kowalski: All right, maybe it couldn't be anything!

Superman: Do I look okay?

Although in fairness to Green Lantern, sometimes Superman will just shrug that off like it's nothing.

Green Lantern: No-one can see the beginning of time! It's a universal law!

Batman: Write him a ticket!

Panda: Sipping tea. What does it look like I'm doing?

Beezy: What is this, dandruff?

Heloise: Yeah, I made a machine that makes dandruff. It's snow!

Pinkie Pie: No. Are you asleep yet?

Rainbow Dash: If I was sleeping, how could I have asked you if you were asleep?

Rainbow Dash: When we get to Appleloosa, you think we'll have to carry that heavy tree all the way from the train to the orchard?

Mr. Plotz: When will all this insanity end?!

Dot: When one of us answers the phone, silly.

Mr. Plotz: I did not know that.

Cheetor, recently having gotten a flying Mid-Season Upgrade he's itching to use: You mean fly?

Rattrap: No, I mean take a submarine. Of course I mean fly!

Natasha: Boris, did you get blown up by your own bomb again?

Boris: It keeps me off the streets, that's why! About six feet off.

Punky: Glomer, are you okay?

Glomer: (not too pleased) Am I looking okay?!

Retrieved from "https://allthetropes.fandom.com/wiki/Ask_a_Stupid_Question?oldid=181063"
Community content is available under CC-BY-SA unless otherwise noted.