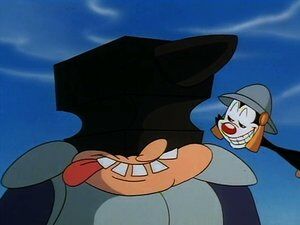 Yeah, Some Anvils Need to Be Dropped, but literally?

The anvil is a simple essential tool of any metalworker, serving as the base on which metal is struck into the desired shape for whatever project is being worked on. These large solid metal objects weigh a ton, are invariably dropped from great height and are used to crush heads, though hands, feet and rib cages sometimes create soft landing spots. Sometimes used to create Accordion Man. They may drop without warning, or they may be heralded by the Shadow of Impending Doom and the Bomb Whistle. The victim usually just has time to look up and see the falling object before it lands on him.

In some cases, especially if full-body crushing is desired, an n-ton weight may be substituted for the anvil. This is a metal weight shaped like a pyramid with the top cut off, a ring at the top for attaching a rope, and the exact weight (usually 1, 10, or 16 tons) painted in white on the front. The 16-ton weight was favored by Monty Python's Flying Circus. In cartoons, if the toon is driven completely out of sight, often a Cranial Eruption will shove the weight out of the way.

And once in a while, it's a safe. In those, occasionally the safe's lock whirls open and the character, who has somehow wound up inside the safe, falls out. Grand pianos are used as well, in which case the character will either end up inside where the strings are, or with a mouth full of piano keys for teeth. Another sometimes used option is for a tree or telephone pole to fall over on top of the character, repeatedly bouncing on their head and driving them into the ground like a piledriver. In Anime, it's usually a washbasin.

Often results in an Accordion Man or a Squashed Flat.

May have its origins in the real life practice of inverting an anvil, putting gunpowder in the hollow in the bottom, laying a fuse leading out of it, and then placing a second anvil right-side-up atop the first. This was used as a Fourth of July celebration. Obviously the real-life consequences of this trope place this FIRMLY in Don't Try This At Home territory.

Not to be confused with Dropped a Bridge on Him or Anvilicious.

Examples of Anvil on Head include:

Retrieved from "https://allthetropes.fandom.com/wiki/Anvil_on_Head?oldid=764857"
Community content is available under CC-BY-SA unless otherwise noted.