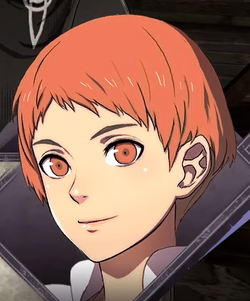 Halfway between Lady Looks Like a Dude and Dude Looks Like a Lady is the character who falls squarely in the middle of the male-female divide... except that no-one can decide which side the character actually belongs on. Lots of subterfuge always follows, as everyone follows him/her around to try and determine his/her sex once and for all. Expect a Gender Blender Name, lots of Gender Neutral Writing and Pronoun Trouble. Usually, his/her gender will never be revealed, and no-one will be any the wiser. This type of character is also subject to The Un-Reveal quite a few times.

The technical term for this kind of person is "androgyne", from the Greek for "man-woman", if you care. Used as an adjective it's "androgynous". And to answer your question: yes. It is a gender identity. It should be noted, that this person’s sex may not correlate to their gender, if they even have one.

See also Viewer Gender Confusion, something which invoking this trope may cause to persist even if the character does get a Gender Reveal.

See also No Biological Sex, for characters who have no physical sex. They may or may not look as androgynous as the ones whose gender is simply ambiguous. Can be one of the attractive things that leads to Everybody Wants the Hermaphrodite.

Examples of Ambiguous Gender include:

Man: Sorry, I thought you were a woman.

Barkeeper: I am a woman.

"Dwarf women are so alike in voice and appearance that they're often mistaken for dwarf men. This in turn has given rise to the belief that there are no dwarf women and that dwarves simply pop out of holes in the ground, which is of course ridiculous."

Angela: That doctor, dude or dudette?

Frog: This is no ordinary woman! Meet Flea, the magician!

Robo: But its exterior is that of a female...

Flea: Male...female...what's the difference? Power is beautiful, and I've got the power!

Frog: She is a powerful magician. Do not lower your guard! Flea is not the mere woman she seems.

Flea: Tee hee hee... Man or woman, it's all the same. Power is beauty, and I'm deliciously strong!

My dear sir, there are individuals roaming the streets of Fallen London at this very moment with the faces of squid! Squid! Do you ask them their gender? And yet you waste our time asking trifling and impertinent questions about mine? It is my own business, sir, and I bid you good day.

Retrieved from "https://allthetropes.fandom.com/wiki/Ambiguous_Gender?oldid=366259"
Community content is available under CC-BY-SA unless otherwise noted.