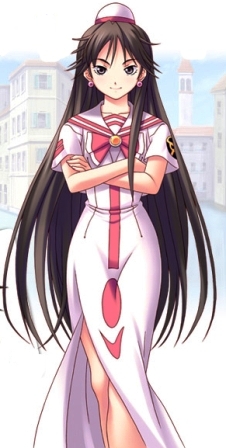 "If you're out on a moonlit night

Be careful of them neighbourhood strays

Of a lady with long black hair

Tryin' to win you with her feminine ways"

She's tall, pretty, aloof, and composed. As a result, she generally attracts quite a following wherever she goes. She usually has waist-length dark hair. If she's unusually pale, she might also have Raven Hair, Ivory Skin. Usually, but not always, a Statuesque Stunner.

While it might not be fair to say that trouble follows her everywhere, it's accurate for most cases of the type. This sometimes causes an undeserved reputation as a delinquent.

Often the target of one or more Schoolgirl Lesbians. If she is one herself, expect her to have a more-or-less Moe or Shrinking Violet girlfriend.

The term was coined to describe Azuma Hazuki of Yami to Boushi to Hon no Tabibito, playing on the old description of a man as "Tall, Dark and Handsome". However, this is not a purely physical characterization; the aloofness is a key aspect of the trope.

This character type crosses over rather regularly with the Ojou, Kuudere, and occasionally the Tsundere. Feel free to compare the examples.

Examples of Aloof Dark-Haired Girl include:

(An excerpt from the Encyclopedia in Shogun 2: Total War)

Retrieved from "https://allthetropes.fandom.com/wiki/Aloof_Dark-Haired_Girl?oldid=343055"
Community content is available under CC-BY-SA unless otherwise noted.