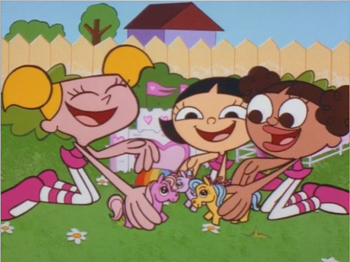 "For whatever reason, girls tend to have a thing for horses. Why in the heck do they have such love for big, smelly animals who leave giant poo everywhere? Why horses and not the Proboscis Monkey?"
—VideoPort review of The Saddle Club, a series that runs on this trope.

Ponies tend to be the stock Christmas wish that has no chance of ever coming true. References to formerly owned ponies can also mark a character as a Fallen Princess.

Of course, the trope is parodied when it's a boy who likes ponies.

This is mainly a North America/Northern Europe trope. In many other parts of the world, liking horses is not considered feminine at all- hence you will not really encounter this trope.

Now somewhat of a Dead Horse Trope, due to more varieties of female characters being included in media.

Mal: Dear Buddha, please bring me a pony, and a plastic rocket--

The Penguin: Hey...why should I trust some cat-broad anyway? Maybe you're just some screwed-up sorority chick, who's getting back at her daddy for not buying her that pony when she turned sweet sixteen!

Marsha: All she wanted to do was show you somebody cared about you.

Daisy: If she'd wanted to do that, then she could have bought me that pony!

Rose: I really wish you'd try to get along with Bingo. I mean, maybe you don't know the fun you can have with a pet. Have you ever actually had one?

Dorothy: Well, of course I had a pet. Remember, Ma? I was six years old and I wanted a pony?

Sophia: Not the pony thing again.

Dorothy: She promised me a pony. She swore I'd get a pony. She brings me a little paper bird on a stick from the circus. You know, the kind that you have to twirl around your head to get them to tweet?

Rose: And that was your pet?

Dorothy: Then she tells me if I'm a good girl, a really good girl, God will turn the paper bird into a real one. Which I believe, because why would a mother lie? So every day I'm being very good, and praying, and looking for any sign of life. And becoming very attached to that ridiculous paper bird. So you can imagine my heartbreak when one morning I find it dead.

Rose: How does a paper bird die?

Dorothy: Good question. Someone used it to restart the pilot light.

"She's a good girl; she's crazy about Elvis, loves horses, and her boyfriend too..."

"I made this half-pony half-monkey monster to please you

But I get the feeling that you don't like it

What's with all the screaming?

Maybe I used too many monkeys

Isn't it enough to know that I ruined a pony making a gift for you?"

Twinkle the Marvel Horse: I've been...so lonely...in here. Such terrible thoughts one has. Alone. In the dark.

Candy: Uh, like I said, I'm really sorry I haven't visited you in a while.

Retrieved from "https://allthetropes.fandom.com/wiki/All_Girls_Like_Ponies?oldid=296148"
Community content is available under CC-BY-SA unless otherwise noted.