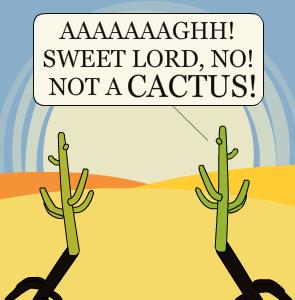 You've Seen It a Million Times. The hero and his comic-relief Sidekick are trudging across the burning sands, looking for water or shelter or for just any way at all out of the hot burning sun, and they walk right past a towering saguaro cactus. The problem is, they're marching through the deserts of Arabia...

In fiction, all deserts have cacti. And usually not just any cacti, but the classic two-armed saguaro (though barrel- and beavertail cacti are also popular). Never mind that cacti are only native to the New World. The Sahara only has bushes, dunes and bare rock. The saguaro, for example, is found exclusively in southern Arizona, northwest Mexico, and a tiny bit of California. For that matter, the entire family of Cactaceae is exclusive to the Americas in its native range - yes, even in high-altitude and colder areas. Of course, the range of cactus species available in fantasy worlds is up for grabs, but putting them all over Arabia, Africa, and Australia is pure folly (granted, they have been cultivated abroad for ornamentation and fruit, particularly the Pitaya, but seeing them in the wild outside the Americas is right out).

If you want to establish that you're in a hot desert, there's no better way than to throw in a cactus. Increasingly, this trope is used to justify a Intoxication Ensues or a Mushroom Samba; while many have heard of Peyote, few realize that it is a cactus - at least until someone on television is trapped in the desert, dying of thirst, and remembers that cacti are full of water... And Knowing Is Half the Battle.

An alternative stereotype is that all deserts are sandy wastelands--aside from the cacti--completely disregarding the fact that all deserts except Antarctica have vibrant ecosystems with their own unique animal and plant life. While cacti are the most well-known, you also have Aloes, for example, which are native to Southern Africa and parts of Arabia. The bit about sand is also exaggerated, as many deserts, including where cacti grow native, are rocky rather than sandy.

In addition, as hinted at above, Antarctica is in fact a desert, as the true definition of a desert is a location with extremely low precipitation a.k.a. not much rain/snow. It's a cold desert, but a desert nonetheless, and the world's largest at that.

Probably a result of either Small Reference Pools or Did Not Do the Research. Or maybe both. May also be a result of filming any desert scene in an area where cacti grow due to lacking the budget to film on location. A subtrope of Artistic License Geography. See Misplaced Vegetation.

Examples of All Deserts Have Cacti include:

Retrieved from "https://allthetropes.fandom.com/wiki/All_Deserts_Have_Cacti?oldid=222506"
Community content is available under CC-BY-SA unless otherwise noted.