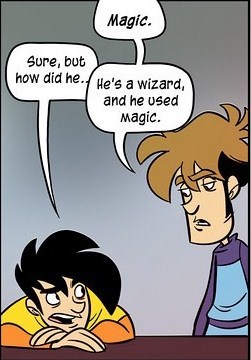 Frink: "Yes, over here, [...] in Episode BF12, you were battling barbarians while riding a winged Appaloosa, yet in the very next scene, my dear, you're clearly atop a winged Arabian! Please do explain it!

Lucy Lawless: Uh, yeah, well, whenever you notice something like that... a wizard did it.

The standard all-encompassing explanation for any continuity errors noticed by hardcore fans of any given fantasy show. If it doesn't make sense, A Wizard Did It. Move on, nothing to see here.

Can be used to Hand Wave away minor nitpicks and Contrived Coincidences that should really be covered by Willing Suspension of Disbelief. However, using it to excuse major Plot Holes that the creators really should've caught beforehand will make people rightly angry.

Often used in the literal sense, as in the page picture, where something that would be impossible happens because someone explicitly used magic to make it happen.

This explanation can also often bring some extra Fridge Logic into a story, when A Wizard Did It is given as an explanation and the wizard later fails in a situation in some way that could have easily been solved by the wizard just doing what he apparently did before. This can also lead to Reed Richards Is Useless when you realize the possible, fantastic uses of that random magic trick nobody seems to care about.

Not to be confused with The Butler Did It.

Examples of A Wizard Did It include:

"The code libraries from Elysium had all sorts of modules for letting people take their own environments with them and making the rules interact - they spent a lot of time trying to entertain themselves - so I picked one of the standard tools that had a really simple interface, where I just needed to answer a few yes-or-no questions to make it happen automatically -"

"A wizard did it!" shouted a buxom woman in black leather armor with a silver hoop strapped to her thighs. There was widespread laughter, and not a few groans of agony.

Shiki: "And how are we alive?"

Shiki: "It’s sad that we can reasonably use that excuse these days…"

"The Plot is strong in this one."

"May the Plot be with you."

McKellen: Why doesn't Gandalf just use his magic to defeat them all?

Jackson: The staff is out of batteries, and because of the war the alchemist's shop is closed and he can't get new ones.

But what I liked most about Mr. Wizard was that he found a middle ground between faith and science: magic. To this day, when my children ask me how something scientific works, I reply "A wizard does it."

Doctor: "There was a goblin, or a trickster, or a warrior. A nameless, terrible thing soaked in the blood of a billion galaxies. The most feared being in all the cosmos.. and nothing could stop it or hold it or reason with it. One day it would just drop out of the sky and tear down your world."

Amy: How did it end up in there?

Doctor: You know fairy tales- a good wizard tricked it."

River Song I hate it when a wizard did it; It always turns out to be him

Q: Can my opponent do something that doesn't make sense, such as casting both Holy Strength and Unholy Strength on his Air Elemental?

A: Yes, these effects are magical, after all.

Midnighter: It's a magical coup, to be sure, and one you do not need specifics about at this time.

Gandledorf: Oh well, we shall pretend the Time-Turner never existed and move on.

Linkara: But how? How did you gain control of him?

Insano: How? Why, with SCIENCE, of course!

Linkara: What part of magic don't you guys understand!?

Critic: Well, wait a minute. What about photosynthe--

Critic: What about the science that goes behind--

Critic: What about the years of research that--

Chick: Magic, damn you! (she punches him.) Don't you ever try to bring logic into this movie again! This is Fern Gully, bitch!

"I probably could have saved a lot of time by telling you these things worked by magic."

Dark Magician: A wizard did it.

Retrieved from "https://allthetropes.fandom.com/wiki/A_Wizard_Did_It?oldid=323354"
Community content is available under CC-BY-SA unless otherwise noted.