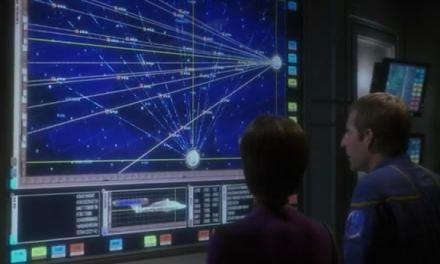 As far as most writers are concerned, space is flat, like a great big tabletop. A few who have actually seen an airplane fly allow that space may have a third dimension as large as five or ten miles high, but not much more than that. There's just enough up-and-down to allow for dogfights between fightercraft and clever one-time-only attacks from above during battles between space warships. Otherwise, vessels approach each other as if they were floating on the sea and attempt broadside or bow-to-bow shots almost exclusively.

Maneuvering is also shackled to the horizontal plane most of the time. Very rarely will shows and writers take advantage of the lack of "up/down" in real space by having ships attack each other at odd angles or vectors, which would offer something visually and tactically fresh. Even outside of battle, when two ships approach each other, no matter where they come from, they will always be oriented the same way; you never see a ship flying "upside down". (On rare occasions, an exception will be made for derelicts. Then again, upside-down derelicts can be found in the ocean, too.)

Perhaps as a corollary to the above, two (or more) starships, when involved in a standoff situation, will inevitably position themselves literally nose to nose in classic stare-down posture. This can be justified depending on the ships' weapons placements, but as often as not it's just a metaphor for the situation. The flip side of this is that when two friendly ships are together they will always be traveling side by side -- that is, "shoulder to shoulder" -- not unlike escorts, even when they're not escorting. Abandoned/damaged ships may list visibly to one side as if sinking. The near-total separation spaceships have between yaw, pitch, and roll, and the path their inertia is carrying them on, is very rarely observed -- "fighters" will nearly always be pointing in the precise direction they are moving in (and bank when turning), as atmospheric planes are forced to.

Needless to say, nobody will ever think of bypassing a planar asteroid belt or similarly hazardous feature by simply going above or below it. It's also possible to wall off part of the universe by placing a barrier that spans the full ten-mile height from top to bottom.

By extension, and by analogy to earth-bound geography, every major location in space is at a fixed position. A planet may turn on its axis (if you're lucky), but its place relative to its sun and other planetary neighbors never changes. Think of a model solar system made of balls on a table. All distances and travel times are static; all positions are permanent and unchanging. Orbits simply don't happen -- if two planets are X units apart on the left side of their sun, they'll always be X units apart and on the left side of the sun.

It isn't always a result of hack writing, though. Sometimes writers do this as intentional Acceptable Break From Reality; two-dimensional strategies are simply easier to show and explain, and much easier for most viewers to grasp (since that's how we're used to thinking). This is especially common in older video games, or ones where three dimensions would needlessly complicate the interface. Furthermore, not only are we used to thinking in 2 dimensions, but there is no concrete precedent for 3D combat yet; ground and naval combat is 2-dimensional, dogfighting isn't done with fleets and is limited by the atmosphere and ground, and submarine combat has important depth restrictions and maneuvering concerns (and has also almost never actually happened).

For pre-CGI film and live action television, using motion control photography, it's also a technical limitation. You have to mount the spaceship somewhere.

Note that having one character (generally the main character or a strategic genius) think in 3D is not an aversion of this trope -- 3D thinking would logically be an absolutely basic requirement for any sort of military training in space; playing it up as a surprising stroke of strategic genius is just approaching this trope from another angle by applying it to everyone except the main character (or whoever the writer wants to make look awesome), akin to trying to show someone as a military 'genius' on Earth for realizing that their army can move from side to side, not merely forward and back. Particularly wall-banging examples will have a character use 3D once, and never again.

Note that all of the negative connotations above applies mainly to a television series...put 2-D Space in a video game and thanks to the Rule of Fun it becomes one of the Acceptable Breaks From Reality.

See also Space Is an Ocean, Acrophobic Bird, One-Dimensional Thinking, Sci-Fi Writers Have No Sense of Scale, and Old School Dogfighting. Do not confuse with with another pair of D's.

Examples of 2-D Space include:

It also gave him great perspective, allowing him to remember that in space battles, as opposed to ground battles, the attacks could come from any position: above, below, behind, or sideways. So many commanders forgot that after years out of a fighter pilot's chair.

"You think you know everything there is to know about battle? You know Orc droppings! Underwater combat is three dimensional. Those thrice-damned Vodalians don't attack in ranks; they attack in schools."

Leela: When you were planning this peace ring, didn't you realize spaceships can move in three dimensions?

Retrieved from "https://allthetropes.fandom.com/wiki/2-D_Space?oldid=282656"
Community content is available under CC-BY-SA unless otherwise noted.